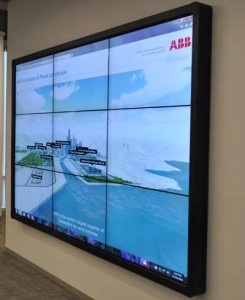 In the world of A/V equipment, a wall display is designed for maximum impact, and for businesses, this impact means memorable messaging. Print isn’t dead, but there’s no denying that it has been usurped by digital media in most respects, and especially in the most important marketing metric of all – the ability to capture and maintain consumers’ attention. This was confirmed in a Temple University study that, though favorable toward print advertising in some ways, demonstrated the power of digital messaging in securing attention. According to the study, people were able to pick out the most important elements of a digital ad faster than when observing a print ad, and were willing to spend more time with the ad.

Companies can make the most of these advantages with a video wall display, because if the novelty of digital marketing is enough to generate interest, it follows that multiple displays will be even more powerful.

How can companies use multiscreen installations to their advantage?

Approximately 98 percent of people aged 18-49 have a cell phone, and more than half use their phones to check the internet regularly. This is to say, today’s primary consumer is comfortable with digital technology and is used to viewing digital ads in any setting. But this is a double edged observation, as companies have to work to make people consider their digital ads in particular.

A multiscreen installation can shake up the way people consider digital messaging when in public, as it is relatively rare, at least compared to other forms of messaging. Multiple screens allow companies to engage in more complex, and more interesting messaging. For example, this what businesses can do with the technology:

Artists, nonprofits and businesses have all made use of the technology, and because it is still so novel for most consumers, it can drive interest in ways that other communications no longer can.