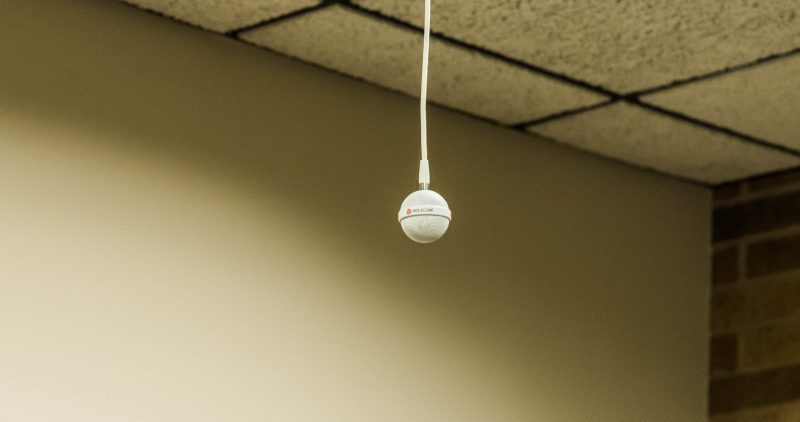 Microphones are Vital in a Modern Meeting Space

You can’t put the A in A/V without microphones, but there’s a lot to consider when choosing a set of audio inputs for your meeting space. For untrained people, audio is a tricky thing to manage. It’s invisible, so how it behaves in a particular space isn’t readily perceptible. A patch of bare wall here, a plant there, a certain seating arrangement, these can and will impact how audio weaves through the space. And then there’s ambient audio like air conditioner noise, paper shuffling and the sound of other electronics powering up. There’s nothing simple about controlling audio in a meeting room, but A/V integrators have the tools needed to make it possible. Among these tools are current generation microphones, many of which are designed to mitigate ambient noise and selectively pick up desired audio.

Consider what a microphone has to do in a meeting space. Rarely are these microphones used to lift audio for others in the room. Instead, the audio is picked up and delivered to a remote party. The people on the other end, be they potential clients or partners, are going to hear things that your team won’t hear on their side. Paper shuffling, finger tapping, a fan switching on – even the most mundane sounds can be like fingers on a chalkboard to everyone on the receiving end. As such, careful microphone selection is imperative, as is careful placement and configuration.

Fortunately, microphones have reached the point where A/V integrators can be quite flexible with them. The best microphones will accurately pick up the speaker while rejecting everything else, but compromises occasionally have to be made. Table space, aesthetics and room layout may pose additional challenges to the integrator, but integrators are up to the task, and will ensure that clear audio remains the guiding priority.

The Right Microphone for the Job

Even the most sophisticated microphone is going to falter if it isn’t matched with the right meeting room setup. Of course, the inverse is true. If a microphone is a perfect fit for a meeting space, then it doesn’t need to come with an exhaustive list of features. The question, then, is what constitutes a good fit between hardware and space? Let’s examine this further.

How does it play out in practical terms? Well, an omnidirectional microphone would make the most sense if it is to be installed in the ceiling. From this position, the microphone will need to handle multiple speakers, who may be seated around the microphone. But for gooseneck and boundary microphones, a cardioid pattern will work better.

2. Can the microphone mitigate ambient sounds? – There is nothing worse than sending over ambient noise and not even realizing it. What sounds entirely innocuous on one side may be ear-splitting terrible on the other. For example, if there is a projector in the room, its onboard fan is going to sound like a plane taking off if it is too close to the microphone. Above all else, it is essential that microphone placement and configuration prioritize what the receiving party is likely to hear.

Much of this comes down to picking the right microphones and ensuring they aren’t too close to anything making noise. Sometimes this is easier said than done. Gooseneck microphones are the best at removing ambient noise, as they are placed close to the speaker and elevated off the table. Ceiling microphones, even those built with noise-canceling technology, often pick up sound from the HVAC system.

But even if a microphone is optimally placed, it should come with some form of ambient noise canceling functionality. Sounds like shuffling papers and pencil tapping are common and can be blocked out with ease. The microphone should be configured to target such sounds and kick out their volume so that they go undetected.

3. Can the microphone pick up a moving speaker? – Now here’s a challenge. How do you register someone who is moving around the room as they speak? There’s always that one manager that can’t sit still while talking, but if they don’t have the proper microphone in place, they’re likely going to cut in and out without warning.

4. Is the microphone compatible with the room’s aesthetics? – Although gooseneck microphones produce the best audio quality, in general, they aren’t much to look at. Mounted to the table’s surface, they’re impossible to miss and are difficult to integrate into a room’s aesthetic. Further, gooseneck microphones require significant tabletop real estate, which may be limiting if that table space needs to be used for devices or documents. Ceiling microphones are on the other end of the spectrum, blending in with their surroundings perfectly, but may lag behind goosenecks in audio quality.

A compromise might be a modern border microphone, which is built into the table’s surface. Border microphones score high marks in the audio quality department, as they sit close to the speaker. They are also aesthetically pleasing and do not sit several inches above the table’s surface. The only issue with border microphones is that they will pick up ambient sounds on the table if the meeting’s participants are not cognizant of the noise they are making. Noise cancellation functionality can undercut this somewhat, but the best approach is to avoid making ambient noises in the first place.

Microphones are half of the audio-visual experience, and audio is half of the communication experience. It’s clear, then, that proper microphone selection and setup is essential to guaranteeing smooth, responsive meetings.