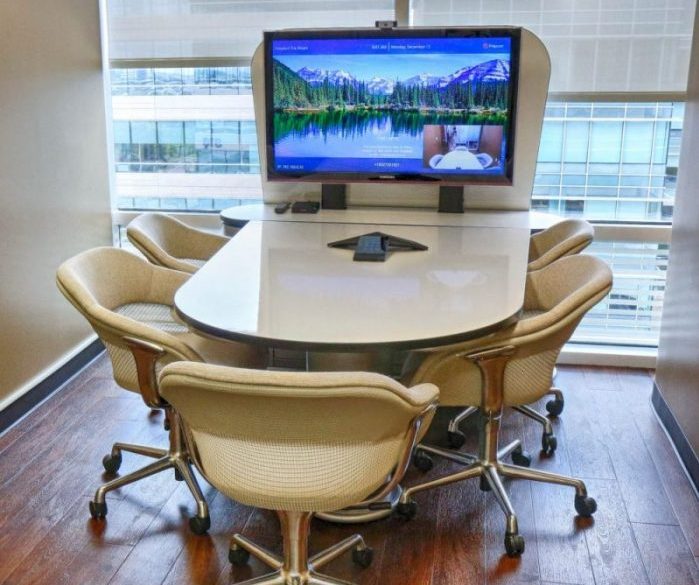 There are endless options on setting up video conference rooms. Which one works best for your company will depend on the size of the room, how frequently conferencing technology is used, the room’s acoustics and the kind of technology your team is comfortable with. Video conference room setups range from the minimalist, single-display approach found in huddle rooms to immersive telepresence systems that may look like they belong in a sci-fi movie.

With so many video conferencing solutions available, there’s no limit to creating the perfect room for collaboration, meetings and training.

Any reputable integrator will tell their client that when setting up a video conferencing solution, the room should be considered first. Not every space is suitable for video conferencing, as ambient noise can make clear communication impossible if there’s too much of it. Some spaces may also be badly affected by poor acoustics, which may necessitate a move to another room.

Integrators, though, are used to solving these challenges and developing solutions for a variety of rooms. Here are some of the more common video conferencing setups that integrators are relying on now:

Huddle rooms are prized for their efficiency of space and their inherent ability to encourage collaboration. Being modest in size, they are only for four or five people, but huddle rooms make impromptu, rapid fire meetings possible without tying up a large conference space.

Large companies appreciate huddle rooms because it’s easier to fit them into a floorplan. With multiple huddle rooms operating, there’s always a space for a quick meeting, and transitioning to a huddle room model may remove the need for larger, more cumbersome meetings. Huddle rooms are a compelling option for small businesses, too, because they are extremely space efficient and easy to use.

A huddle room usually consists of a single table, some chairs and the video conferencing equipment. This means a digital display, a camera, a video conferencing codec and, if wiring in, a place where the HDMI or VGA ports can be accessed.

In response to the rapid rise of huddle rooms, industry leaders like Poly (formerly Polycom) have developed conferencing solutions perfect for smaller meeting spaces. For example, USB video bars combine the camera, codec and speakers into a single piece of hardware that’s easy to mount and use.

2. 360-degree solutions – Many video conferencing rooms run a standard layout with the displays on one end of the room, along with one or more cameras and a set of speakers that are laid out for optimal coverage.

It’s an effective approach, but one that’s been addressed plenty of times. What about a conferencing room where everyone is situated around the display? They exist, and they provide a few key advantages. Everyone is close enough to the display that it’s easy to see what’s going on and therefore easier to have a face to face conversation. In traditional conference rooms, the people at the far end of the table may be so far away that they don’t participating in the conference at all. A 360-degree solution solves this. This approach also allows for some creative room layouts, as multiple conferencing stations can be set up if the space is large enough to allow for it. It’s perfect for training purposes.

Among 360-degree conferencing solutions, Poly’s RealPresence Centro is the most notable. It includes four displays, each facing a different direction. It comes with a 360-degree camera that will follow speakers as they move around, which allows people on both ends of the call to maintain the conversation even if they get up and walk around.

Immersive telepresence leverages the best of video conferencing hardware, like expansive video walls that extend the viewing area and give participants extra space to work with. These video walls consist of displays capable of ultra HD resolution, and can be sized up to 84 inches. Sophisticated camera and audio technology are also present, so even if there are more than 20 people in the room, every time someone speaks, they are framed by the camera. Enhanced audio technology performs better than stereo in locating where sound is coming from and processing it for maximum clarity.

Some of these solutions are better suited for larger corporations, but smaller businesses can run their primary video conferencing room like a huddle room, especially if conferencing isn’t needed frequently. Mobile and desktop conferencing software is another viable solution for small companies, as it precludes the need for additional hardware.